If you want to send something, use...

Well, the journey to Hawaii is complete. After 12 hours of flying and an 18-hour stopover in Okinawa, we are now in Honolulu. The medi-vac operation was rather impressive. The flight crew and nurses were GREAT! The Air Force was airlifting a pre-mature baby (along with an entire NICU team), a patient from Korea, and Sara. We dropped off the baby in Okinawa and the rest of us flew on to Hawaii. 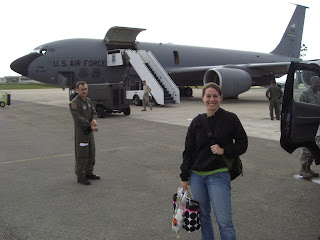 Sara and her own personal jet
We got off the airplane this morning and headed straight to Tripler Medical Center for the initial appointment with the Surgical Oncologist. The surgeon is not going to operate until they are sure what "the lump" consists of. We are going in tomorrow for some blood work and a chest x-ray (to make sure the lungs are clean and clear) and then on Tuesday, she will have a biopsy of "the lump" and lymph nodes.

Col DeLong (my boss from Osan) and Holly met us at the hospital and made sure we were taken care of. It's nice to know Colonels who get stuff done! We got a car from the Williams and then met Sara's family (who had flown in on Wednesday night). We're getting settled in and are hoping to get some beach time tomorrow.

So, there is your latest update. I rescind my previous statement about updating on a daily basis, but will update it when we get pertinent info regarding Sara (or do something neat in Hawaii).
Posted by The Sullivans at 5:34 PM 9 comments: 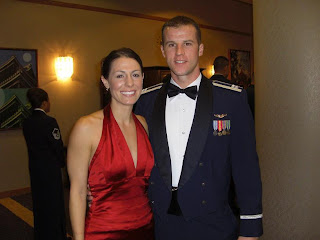 Instead of sending multiple emails to different groups, we're going to consolidate efforts and update the Sullivan Blog as we take on the next hurdle of life...we will try and update this daily. Feel free to keep sending emails to saramarisesulli@yahoo.com and bradsulli@gmail.com.

We are leaving Misawa this afternoon on our way to Tripler Army Medical Center at Hickam Air Force Base, Hawaii. Sara has an appointment with the surgery clinic on Thursday morning and we'll know more then. Right now, there is so much that is unknown. The doctors don't want to speculate, but we get the impression that we might be in Hawaii for an extended stay.

Thank you so much for your thoughts and prayers. It is said that sometimes Jesus calms the storm and other times he calms the child. We feel that there might be a storm on the horizon, but we are surrounded by his peace! Keep praying.
Posted by The Sullivans at 4:50 PM 11 comments: